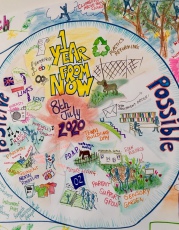 “This was the most inspirational team building day, thank you Sharon and Kat, we all had such fun coming together with a real purpose -  to create our vision. I was absolutely moved, humbled and filled with energy, brilliant, please can we book you for the same date next year!” Head teacher
“I didn’t realise that I would be allowed to do all these things, I just never asked, thank you, I am so excited to set up our cafe with the boys” MDSA
“What an amazing way to bring everyone together, share hopes and dreams and then create a truly shared vision, everyone feels ownership and sees their part of responsibility on our journey to improvement,  our PATH way! Thank you Kat and Sharon, just brilliant” Governor

What is a PATH?

PATH is a creative planning tool that uses both process and graphic facilitation to create a shared vision of a positive future for individuals, families, teams and whole organisations. PATH draws on people’s ability to visualise different futures and to plan backwards from a future vision or dream and tell stories about how that vision can come into being. It is ideal for developing a cohesive and shared vision whereby all participants feel they have authentically contributed.

The PATH session will be led by two or three trained facilitators – a process facilitator who guides people through the stages and ensures that the person is at the centre throughout, and graphic facilitators who create a large graphic record of each of the steps in the PATH.

There are 6 steps in the PATH process and it is rather like the facilitators are placing six different sorts of ‘containers’ in front of the group and asking them to fill them one by one.  A typical group PATH can involve as many as 40-50 stakeholders made up of staff, parents, members of the community, and most importantly, the children and young people that remain our focus.  A PATH lasts for around 3 hours (possibly longer with larger groups). Each step in the PATH process has its own particular conversation associated with it.

The Vision: PATH begins by asking the pathfinder to think about what a good life for them would look like. What matters most to them as they think about their future? Others in the group will be asked to build on the vision and say what kind of future they would love to see for the pathfinder. This is the longest step and sets the direction for the rest of the PATH

SENSING the GOAL  – ‘Positive and Possible’. In this step the facilitators ask the group to imagine that a year has passed since they created the vision. The conversation in step 2 is about looking back on the ‘past year’ and remembering what has been achieved in this time towards the vision. This is a more grounded and realistic step – we are not dreaming anymore. – All the stories and memories heard in this step need to be possible (they could actually have happened) and positive (we are only remembering the good times). Step 2 aims to give the group a better sense of what it could look like if they really were on track towards the dream.

NOW – this step aims to create a tension between the vision of a positive possible future and where the pathfinder is now in relation to this future. The facilitators will ask you to talk about the facts and figures of the now. It is a conversation about where the group is starting from.
The remaining steps are now focused on the different kinds of actions needed to bring the positive future closer…

ENROL – this step asks the group – ‘who will we need with us on the journey?’ towards the positive future – it is an opportunity for the pathfinder to invite those present to enrol in his or her future as well as committing themselves to that future. The facilitators will also ask the group if there is anyone who is not present who should be invited to join the group in the future and any names given are recorded for future invitations.

STAYING STRONG – this step asks the group to identify and talk about what they will need to do (and not do) to keep focused on the path ahead – naming what skills and capacities they already have and can put to work as well as the relationships knowledge and skills they will need to develop.

ACTIONS – this final step gets the group to identify bold next steps – both big and small that can be named now. The focus will move between things that can be done tomorrow and things that can be achieved in a week or a month’s time. The facilitator’s will push for specifics – the who, what, where and when of actions to be taken. Agreement will also be made on when progress will be reviewed

The PATH process ends with a round of words and reflections from the group on the work they have just done together and the completed PATH is photographed, taken down from the wall, rolled up and presented to the individual or team.